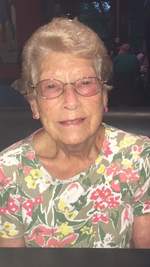 Doris R. (Luce) Jacobsen of West Cape May, N.J. died Saturday, Sept. 14, 2019, at her residence. She was 91. Born in Rockledge, PA and a resident of West Cape May for the past 24 years, and previously of Bensalem and Lower Southampton, Pa. Doris worked for the Bensalem Township as a secretary in the mayor’s office for many years. She was a member of the Cape May Historical Commission where she also served as former Secretary. She was also the Vice President of the West Cape May History Committee. Doris was a member of the West Cape May Zoning Board and the Cape May Business Association. Doris also enjoyed politics and spending time with her family, especially her grandchildren. She was preceded in death by her beloved husband of 61 years, Henry Jacobsen. Doris will be sadly missed by her 2 loving children Robert Jacobsen (Lisa) and Linda Motyka (Stewart). She is also survived by her brother: Jack O’Donnell (Euince); 4 Grandchildren: Austin, Justine (Fiancé Christian Weckerly), Christopher and Noel (James); 3 Great Grandchildren: Hailey, Sean and Ensley.
Relatives and friends are invited to attend her Funeral Service Wednesday at 11 a.m. at the Church of the Advent, 686 Washington Street, Cape May, NJ 08204 where friends may call from 10 a.m. until the time of service. Friends are also invited to attend another Funeral Service on Thursday, at 11 a.m. at the Tomlinson Funeral Home, 2207 Bristol Pike, Bensalem, PA 19020, where friends may call from 10 a.m. until the time of service. Interment will be private. In lieu of flowers, memorial contributions in her memory may be made to the West Cape May Historical Commission, 732 North Broadway West Cape May, NJ 08204. www.tomlinsonfh.com

All rights reserved. This obituary is also archived at obittree.com