To share your memory on the wall of George Roberts, sign in using one of the following options:

Provide comfort for the family of George Roberts with a meaningful gesture of sympathy.

We encourage you to share your most beloved memories of George here, so that the family and other loved ones can always see it. You can upload cherished photographs, or share your favorite stories, and can even comment on those shared by others.

Jerry and Charlene McQuillen, Love the Takach and Cronin Family, and others have sent flowers to the family of George E. Roberts Sr..
Show you care by sending flowers

Posted Oct 22, 2019 at 04:09pm
We were so sad to hear about Uncle George's passing. Our hearts are filled with sadness. Please know we are thinking and praying for you all.

Flowers were purchased for the family of George Roberts. Send Flowers

Jerry and Charlene McQuillen purchased the Vivid Recollections for the family of George Roberts. Send Flowers

Love the Takach and Cronin Family

Posted Oct 22, 2019 at 09:44am
With Unconditional love and remembrance, You will be missed but never Forgotten

Love the Takach and Cronin Family purchased flowers for the family of George Roberts. Send Flowers

Posted Oct 21, 2019 at 06:57pm
Going to miss that quick funny answer he give me and that great laughter he would share. George was a wonderful warm caring man who loved his wife and family and so I’m very sorry that he gone but he’ll always be in all our hearts. Prays to you , Carol and your family.❤️
Comment Share
Share via: 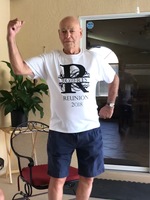